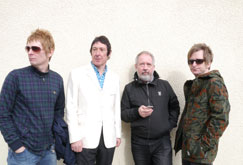 There are hardly any bands performing today that genuinely deserve the adjective legendary. Buzzcocks are one of those very few. Their achievements are staggering: one of the original holy trinity of British punk (with the Sex Pistols and the Clash), innovators of the independent record scene and genuine punk rock superstars who have been cited as inspirational by bands as diverse as REM, Nirvana and Green Day. Nine studio albums, over twenty singles and EPs, a constellation of compilations, covers by other bands and songs on film soundtracks and advertisements have put Buzzcocks among the top echelons of British recording artists. A Mojo Inspiration award in 2006 is just one of the many accolades they have received for their work.

Buzzcocks have been thrilling audiences for over thirty-five years. Once called the Beatles of punk, their music blends high-octane guitar, bass and drum power with heartrending personal statements of love won and lost or dismay at the modern world to create a unique catalogue of unforgettable and immortal music  music they continue to deliver to fans old and new around the world with undiminished passion and energy.

Buzzcocks have penned numerous slices of punk rock history, including Orgasm Addict, What Do I Get?, Harmony In My Head and of course, the song that became their calling card: Ever Fallen In Love With Someone (You Shouldntve Fallen In Love With?).

Punk pop at its finest
ALL MUSIC

The original and best
MOJO