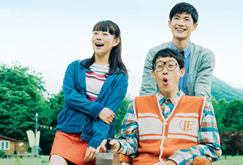 A Banana? At this time of night?

Due to concern and restrictions on international travel, the Q&A with director Maeda Tetsu will no longer be taking place. As it stands, all other events at Exeter Phoenix  are going ahead as planned. Please be assured that we are closely monitoring the situation and will take all appropriate action to ensure the safety of customers, staff and our community. Further updates on this can be found here >>

Yasuaki (OIZUMI Yo) doesnt let muscular dystrophy slow him down. A charming and eternally positive man, he is determined to live an independent life and fulfil his dreams with the help of coerced volunteers Misaki (TAKAHATA Mitsuki) and Tanaka (MIURA Haruma). Based on a true story.

Fancy a light bite? Were offering our vegetable gyoza appetiser alongside a bottle of Asahi for only £6.95. You can pick up this offer throughout all of March!