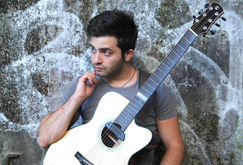 Luca was born in 1991 in Varese, at the North of Italy. Since his early ages, he demonstrated strong passion for playing guitar. He began to take guitar lessons at 10. Later he became more and more attracted by unconventional techniques of playing guitar experimenting a lot with the instrument, as well as trying it in combination with other musical pieces.

Enjoying a quick success Luca has won various young talents shows and competitions, and at his 22 became one of the first young Italian guitarists, in whom a famous American guitar label CandyRat Records took an interest.

It was a real breakthrough in February 2015, when Luca gave to the world his version of AC DC famous hit Thunderstruck, reaching 2.5 million YouTube views in its first month. The young guitarist was really inundated with collaboration offers from all over the world. In September 2015, Luca left for his first tour in the UK and becomes the most talked-about guitarist at London international guitar forum of 2015  London Acoustic Guitar Show 2015.

He embarked on his second tour in January 2016. Having been published in October 2015, his first album on CandyRat Records was distributed in a wink in large edition all around the world. After finishing the year 2015 with concerts in Germany, already in 2016 Luca wins the hearts in China, Scandinavia and the famous Festival of Virtuosos on Reunion Island, having his tour map of Europe expanded every month. At the beginning of 2017 and at that very moment when this press release is being written, Luca is on his great two-month tour in the US and Canada.

Besides his outstanding technique of playing guitar, Luca fascinates the audience with his young Italian charm, turning every movement, as well as every note, word or smile into an unforgettable show. He is the only one in the world who can play 2, 3 and 5 guitars at once. He is using even his foots while playing guitar, and this fact was noted by legendary Stanley Jordan (4 nominations for GRAMMY) like ‘Luca expanded the genre of fingerstyle to fingerfootstyle’.

At Autumn International Tour 2017 Luca comes back with new program and new instrument – a triple-neck acoustic guitar that is a real rarity among the acoustic guitarists of the world.

‘Every so often, a musician emerges who, in terms of depth of expression, advances a style so much that the way we listen changes forever … Italian guitarist Luca Stricagnoli embodies such a shift … Hes playing at a higher level.’
MINOR 7TH