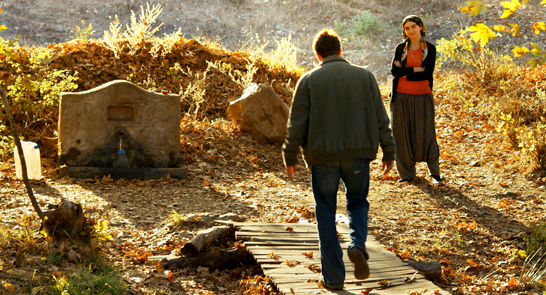 Sinan is passionate about literature and has always wanted to be a writer. Returning to the village where he was born, he pours his heart and soul into scraping together the money he needs to be published, but his fathers debts catch up with him.

Along with superb performances and Celyans directorial skill, The Wild Pear Tree is a remarkable and satisfying portrait of both of an individual and of a society.

????? ‘A beautifully acted movie. An unhurried elegaic address to the idea of childhood and home. Garrulous, humorous and lugubrious in his unmistakable and very engaging style’
GUARDIAN

????? ‘A lyrical, tremendously acted drama of prodigal fathers and sons. The word visionary has been flogged by the film business to the point of redundancy, but with The Wild Pear Tree, Ceylan reminds us he has earned every letter of it’
THE TELEGRAPH

????? ‘Hypnotic and beautiful, Ceylan is wonderful at this length stopping you me and every bewitchable soul to tell a story that for long passages hardly seems like a story at all’
FINANCIAL TIMES

????? ‘Nuri Bilge Ceylan’s sublime literary opus. Theres something miraculous about a film which doesnt appear to be driving towards a finite end point, but somehow manages to arrive at one which is so perfectly judged, so surprising, so moving and so transcendent’
LITTLE WHITE LIES

????? ‘Ceylans films have the depth and richness of great literature, but he is equally adept at crafting transcendent cinematic moments on the big screen‘
CINEVUE

???? ‘An epic character study from a genius of world cinema. Moments of magic and mischief’
TIME OUT

???? ‘A wealth of flowering expression on the subject of loss. Slyly understated humour.’
THE TIMES