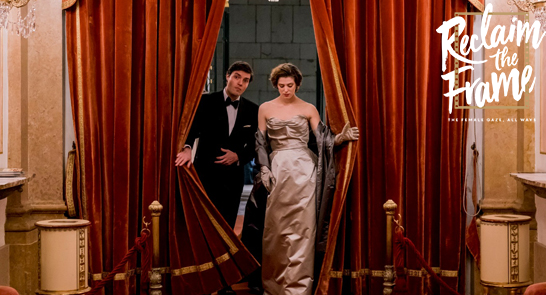 Julie (Honor Swinton Byrne) is a young film student struggling to find a firm direction in life when she meets the seemingly unwavering and decisive Anthony (Tom Burke). The two immediately take to one another and an intense romance blossoms between them.

However, as the relationship develops it becomes clear that Anthony is not being honest about all aspects of himself and Julie slowly discovers that they could have potentially devastating consequences for them both.

One of Britains most unique filmmakers Joanna Hogg (Archipelago, Unrelated) presents a deeply personal examination of her own youthful experiences in this beautifully crafted, Martin Scorsese produced portrait of self-discovery, The Souvenir.

Bird’s Eye View and #ReclaimTheFrame present Joanna Hogg’s The Souvenir introduced by an exclusive recorded interview with Joanna Hogg and Birds Eye Views Director-at-large Mia Bays, accompanied by a unique giveaway. There will also be a post-show lightning talk about Joanna Hogg, delivered by Davina Quinlivan.

Davina Quinlivan is Senior Lecturer in Film (Critical and Historical Studies) at Kingston School of Art, Kingston University. She writes on the intersections between film and philosophy, especially feminist thought, the cinematic body and film experience. She is author of The Place of Breath in Cinema (EUP, 2012), Filming the Body in Crisis: Trauma, Healing and Hopefulness (Palgrave, 2015) and Joanna Hogg: Female Expression and the New British Art Cinema (EUP, forthcoming in 2020).

N.B. Mia Bays will not be hosting the screening of The Souvenir on Sun 15 Sep and there will also be no post-show lightning talk.