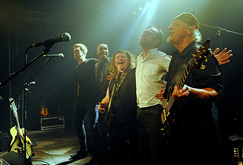 Guitarist with Jethro Tull for a staggering 43 years, Martin’s solo on ‘Aqualung’ was voted the 25th finest solo ever in a U.S. guitar poll, just one small accolade for a guitarist who’s worked live with Phil Collins, Gary Moore, Joe Bonamassa, Paul McCartney,  and  in the past has shared stages with  Hendrix, Fleetwood Mac, Pink Floyd and Led Zeppelin. His current band has been together for four years and will be playing many of those classic songs from the ‘Tull’ back catalogue.