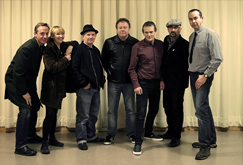 The Lambrettas came into being in the late 1970s – they are most remembered for their second single Poison Ivy, and album Beat Boys in the Jet Age.

Since 1982 up to 2009 the band got back together now and then, but never with the intention of it being permanent. However, in 2009 Doug and Paul were asked if they would get back together to do a short set at a Modrophenia event in Brighton. As Jez could no longer be with them, and Mark was in America, they were joined by Phil Edwards on guitar and Chris Venzi-James on bass. After the Brighton gig it was clear they were back together permanently. Paul says: ‘we asked Mark if he wanted to come back to England, but he was settled in America and so we kept to the line-up we had rehearsed with.’ They are still in regular contact with Mark.

In 2014, due to other commitments Chris was replaced temporarily by Nick Beetham on bass. However, they now have full time bass player Ant Wellman, who joined them at the beginning of 2015. In the summer of 2015 the addition of a 3-piece brass section for some shows has added a new dynamic to The Lambrettas. They are Helen Kane on trumpet, Dan Rehahn on trombone and Mark Mansell on sax. They have joined The Lambrettas for most shows ever since

During January and February 2016, The Lambrettas were in the studio recording a new EP, Go 4 It. This was due to be released in 2016, but was held up for various reasons. Release date for Go 4 It is now 30 January 2017, and can be found on CD and vinyl in record stores from that date.  2015 saw the 35th anniversary of the release of Beat Boys in the Jet Age. To commemorate this, Beat Boys was re-released in February 2015 on the Salvo label. The package also includes a second CD with Ambience, singles and B-sides, and is available from Amazon.

The Chords, a South East London group, formed in 1978 when singer/guitarist Billy Hassett and his bassist cousin, Martin Mason, advertised for musicians in the NME and found guitarist and songwriter, Chris Pope. Original drummer Paul Halpin did not stay long, at least behind his drum kit, and eventually became the group’s tour manager. In his place came Brett “Buddy” Ascott, and by March 1979 The Chords were taking the stage. They gigged continuously over the spring and summer, headlining two mod festivals at London’s Marquee Club and recording their first BBC Radio 1 session for DJ John Peel in early July. They also featured, along with some of their fans, on the cover of Time Out magazine. Amongst their early supporters were Paul Weller, who saw one of their first concerts, and Sham 69‘s Jimmy Pursey, who signed the group to his JP Productions company.

They followed it up in January 1980 with Maybe Tomorrow, which, bolstered by rave reviews in the press, shot in to the UK Top 40. A second Peel session was recorded in March, and the next month their third single, Something’s Missing, arrived. This taster for their debut album, So Far Away, reached No. 55. The album made No. 30 in the UK Albums Chart in May, bolstered by a UK tour. The album included two cover versions; Sam & Dave‘s Hold On, I’m Comin’ and The Beatles‘ She Said She Said.

In August 2010, The Chords went back on the road with their original line-up, promoting the single, Another Thing Coming, and playing gigs across the UK. They also toured Australia and Japan in 2012. There is now a DVD What Became of the People We Used To Be – The History of The Chords charting the band’s rise to cult status.