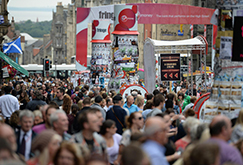 Receive 10% off your order if you also book for Introduction to the Live Entertainment Industry and/or The Creative Strategic Pitch – From Lightbulb To Delivery.

Join Emma Bettridge, a South West based producer, on a journey that interrogates what exactly a producer does. Or indeed what even is a producer anyway? Having started her career at the Edinburgh Fringe Festival as part of the Pleasance venues to producing new work for Bristol Old Vic, Emma will lead you through Edinburgh and non-Edinburgh specific approaches to making a show and what you do with it once you have it.

We will focus on pitching your idea, networking and some fundamental skills needed when starting out. From an early idea to the final show, this workshop will debunk the jargon, which often surrounds theatre producing, get straight to the point and answer your questions.

The following practical skills will be explored

Emma Bettridge is a Producer, Dramaturg and Festival director. She is the Producer for Bristol Old Vic Ferment and trustee for Wiveliscombe Town Hall, near Exmoor. Prior to this she ran Pulse festival at the New Wolsey Theatre for three years and was part of the curatorial group for Caravan2014 (Farnham Maltings/Brighton Festival). She was an associate reader for the Soho Theatre, a consultant for East to Edinburgh (ACE East initiative) and a peer reviewer for the Wellcome Trust from 2010-2013. In 2010 she managed Gecko’s international tour of The Overcoat (China & UK), produced the national tour of My Name is Sue (Northern Stage, Queer Up North, Soho theatre) and worked on the NSDF festival in Scarborough.

Between 2004 and 2009 she ran the Pleasance London and Edinburgh Programmes. Her passion lies in developing and commissioning new work, with a real love for making art in the South West. With a focus on creating and enabling artists to make the best work they can. Examples of this type of process are demonstrated in Stillhouse’s Ours Was the Fen Country, The Bullet and the Bass Trombone (Sleepdogs), Exposure (Jo Bannon), Sue the Second Coming (Dafydd James & Co) and Hoke’s Bluff (Action Hero).