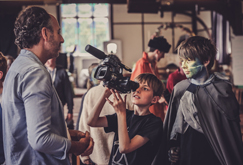 New for 2020 is the Summer Film School Post Production Course!

This three day course is aimed at kids aged 10 to 14 years old. With the help of our team of skilled filmmakers youll get to see exactly what it takes to turn hours of uncut footage into the latest Summer Film School masterpiece.

This course will be held at Exeter Phoenix, and each day will run from 10am  4pm, with a dedicated lunch break.

Spaces are limited. As there are only 12 places available, early booking is advised.

If you want to get hands on with everything from prop making to acting, then check our Summer Film School 2020!

Four of Swords Theatre was founded in 2012, born of two friends determination to create sensational theatre, and right from the start the use of film projection in their theatre shows was integral to their work. Since 2014, they have combined their filmic and theatrical expertise for Exeter Phoenixs Summer Film School and other filmmaking workshops including Sherlock Holmes and the Mystery of How to Act on Film. In 2018, Film School even went international, when Four of Swords took it to Shanghai, China.

For more information, and to see any and all of the previous years’ films, please go to: http://four-of-swords.com/film-school/

Summer Film School 2019 Behind The Scenes