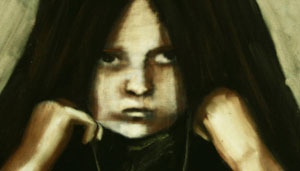 Our primal instincts kick in for this short film screening as the protagonists let out their wild side. Not for the faint-hearted, this programme tells of a demonic visit to a Manchester council estate, menacing presences lurking under 16-wheelers trucks and a cat with an insatiable appetite.

A young girl’s repressed emotions and instincts are embodied in some animals that come out of her dreams. However, no one in her family is receptive to these animals.

Manchester, England 1990. On a troubled estate, Alice is roped into babysitting for her neighbour, whose children claim to feed a nightly visitor from Hell. Between gangland tensions, local superstition and drug withdrawal, Alice must decide whether to abandon her new wards or stay the night.

There’s something wrong with the cat

A change of pet food has fatal consequences.

Oh What a Wonderful Feeling

Stars, hide your fires; let not light see my black and deep desires. Nor any truck.

At night, the forest creatures gather to gamble, putting their innermost valuables at stake.

The earth quakes, ashes fall from the sky, and theres this fire that firefighters can’t manage to extinguish. The villagers decide to take refuge in the forest. Surronded by wild beasts, a new life begins.

Raimo’s comfy middle-class bubble is burst when a Satan-worshipping sex cult moves in next door.

Chloe thinks she’s just going in for a routine test. Things do not go as planned.