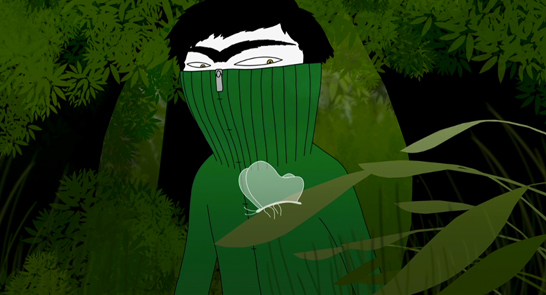 This handpicked selection of exciting and inventive new animation films will take a closer look at the curiousness of childhood and growing up too soon. Watch Glen tap into his masculinity at a primal scream therapy in BAFTA nominated Manoman. In Pombo Loves You a distant father confronts his past life as a 1980s TV character, with a little encouragement from his son.

Saigon, Vietnam. After her mother’s death, a young girl has to quit her studies to take over the family cafe. Facing a radical change of life, loneliness and sorrow, she gradually gets confused.

In the summer of 1992, Dujung, a boy in elementary school, goes to a farm in the suburbs with his parents. While his parents believe the expensive and rare specialty from the farm will strengthen their sons body, Dujung suffers from side effects.

Durian was born with his facial expressions opposite to everyone else’s. The film shows a time span of this little boy growing into a young adult, featuring milestones in both his real life and his imaginary world.

LOVE describes affection in 3 different chapters, through an impact on a distant solar system. Abstract haiku-like situations reveal the change in atmosphere on one planet, caused by the change of gravity and light. This pulsing planet makes the inhabitants become one with each other in various ways.

The story of Glen, a man who attends a Primal Scream therapy class that causes him to release something deep within that knows no limits.

A distant father is forced to confront a heroic yet troubled past life as 1980s TV character Pombo.

A homeless orphan, an animalistic little kid escapes the big city into the darkness of the woods. It is there that the kid meets a creature mightier than ever imagined.

Some things can only be understood with maturity. New light is shed on childhood cultural misunderstandings when a Chinese mother and her British born daughter speak as adults for the first time.