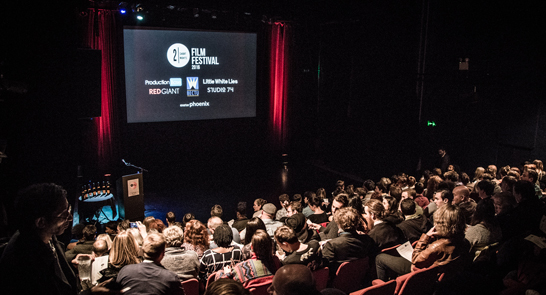 A handpicked selection of exciting and inventive new animated short films. Featuring an eccentric group of outcasts and misfits looking for somewhere to call home, these high impact animations are as visually impressive as they are emotionally engaging.

Don’t Think of a Pink Elephant

Layla fights daily against urges and compulsions, until challenged to face her darkest fears.

A terrified giant holds off eating to avoid revealing his ogresque self to everyone around him. During a business banquet, his true nature will be put to the test.

Stranded on a distant planet, a lonely astronaut sends out a signal in search of human contact.

Paul hasn’t seen his son in five months since the divorce; the only form of contact he is allowed is through a weekly video call.

Charles is different, a boy with grown-up problems. At home he has to care for his mother who appears to be ill, and at school he is bullied. Longing for a normal family life, he escapes into a parallel world filled with frogs.

After a flood, some fish got stuck in old trees. In danger of drying-out they scream sharply. Woken up by the noise, the inhabitants of a nearby cave dont feel happy about the unintended gathering.

In the magic forest it is dark and cold; the fog so thick that not a single ray of sunlight shines through. The plants are withered and the lakes frozen, with nothing stirring anymore. A lone girl and a deer are wandering through this icy landscape. What are they looking for?

The unfortunate death of a wild rabbit turns into a remarkable experience for children who find his body and bury it in a sand box. Dozens of magical creatures start leaving him and merge with nature.

An ugly cat struggles to coexist in a fragmented and broken world, eventually finding a soulmate in a mystical chief.