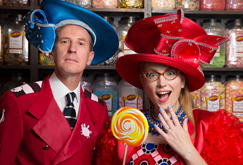 Its a bird! Its a plane! No… its a fat flying pony named Kevin. And my, does that pony love biscuits!! When he crash-lands on the balcony of Maxs flat hes just in time to save the town from an almighty flood, awash with mischievous mermaids and cheeky sea monkeys. Join co-authors Philip Reeve and Sarah McIntyre to learn more about Kevins adventures. Drawing, games and more! Youll believe a pony can fly…

Philip Reeve is a renowned childrens writer and author of The Mortal Engines trilogy, Here Lies Arthur and Railhead.Mortal Engines is currently being made into as film due for release in December this year. Philip also writes books for younger children, working with illustrator, Sarah McIntyre  such as Oliver and the Seawigs, and Pugs of the Frozen North.

Philip says: ‘We have great fun coming up with the characters and the story together, then I write them down, and Sarah does the pictures. The books are aimed at 7  10 year olds, a slightly younger age group than most of my other books, but I think theyll work for younger children if theyre read aloud, and hopefully the humour and Sarahs wonderful illustrations will appeal to older readers too‘.