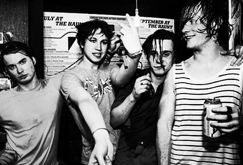 Ahead of headlining the upcoming NME Awards tour, Palma Violets are coming to the South West to play a series of intimate gigs.

Palma Violets are an English band from London, formed in 2011, based on the musical partnership of frontmen Sam Fryer and Chilli Jesson and the bands musical output is primarily based around the rock genre, with some Garage rock and psychedelic influences.

In September 2011 if you wanted to hear the most exciting new band in Britain, rather than searching online you knocked on a tall black door off the Lambeth Road. Part art studio, part squat  Studio 180 was where south Londons thrilling rocknroll four-piece Palma Violets were holed-up writing songs their friends could dance to and throwing celebratory, ecstatic parties about which word quickly spread.

The opposite of the last significant development in English guitar music when the Arctic Monkeys became the first “Myspace band”, harnessing the power of the internet and prompting BBC documentaries and convulsions in major record labels, the Palma Violets rise has been notable by their total avoidance of the worldwide web.