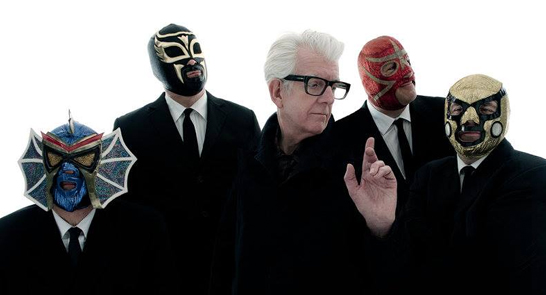 This is in fact the first time that Nick has toured with a band outside the USA in over 10 years. Riding high with a new album release and a career spanning profile in December’s Rolling Stone Magazine, the tour follows on from last year’s critically acclaimed recording and tour across North America with Los Straitjackets. Nick’s first new music in over five years is featured as well as all the old favourites from his glittering career.

What can you say about one of the most respected figures in the music industry? Nick Lowe helped shape Punk Rock  produced Elvis Costello, The Damned, The Pretenders, Huey Lewis, Paul Carrack and Dr Feelgood. He formed the infamous Brinsley Schwartz (who recently reformed for Glastonbury), formed Rockpile with Dave Edmunds, formed Little Village with Ry Cooder and John Hiatt, hung out with Johnny Cash, marrying his daughter Carlene Carter and the famous man in black recording several of Nick’s songs.

He was in house producer for the legendary Stiff Records, as well as his role as a gifted songwriter, spinning out gems like Cruel to be Kind, I Love the Sound of Breaking Glass,  and  I Knew the Bride when she used to Rock n Roll.

LOS STRAITJACKETS are the leading practitioners of the lost art of the guitar instrumental.  Wearing their famous Mexican wrestling masks on stage, they have nuances of The Ventures, The Shadows, Link Wray and Dick Dale in their unique high energy brand of original Rock n Roll.

They have toured round the world in their own right and their music has been used on innumerable Movies and TV shows. Their most recent album, consists of covers of Nick Lowe songs, What’s so Funny ‘Bout Peace Love & Los Straitjackets.

A UNIQUE LIVE SHOW AND A NIGHT TO BE REMEMBERED!