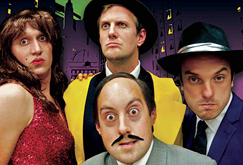 Newsflash! There’s been a series of high-profile crimes right across the city – but fear not…The police chief’s put his best man on the job – Dick Tracy. It’s now down to the square-jawed, hard-hitting, fast-shooting, comic book detective to solve the crime the only way he knows how…the crime solving way… Will Tracy be able to save the day, get the girl and get to the bottom of who’s causing the mayhem? Or perhaps the truth is closer than he thinks….

With their work rooted in the ridiculous, Le Navet Bete’s Dick Tracy is a physical comedy influenced by the world-famous detective, incorporating fooling, original live music, plenty of audience interaction, lightning quick character changes and incredibly authentic accents, spattered with mystery, malice and mischief. Having wowed audiences across the globe since 2007 with their inimitable, tightly-honed style of comedy performance, the award winning Le Navet Bete team up once again with one of the UK’s most exciting comedy directors John Nicholson (Peepolykus).

Supported by Arts Council England, Dick Tracy promises to have the bad guys in handcuffs and the audience in stitches.

‘Le Navet Bete are a company on top form and leagues ahead of anyone else doing this work.’ ?????
WHAT’S ON STAGE (EXTRAVAGANZA)

‘Hilarious and utterly engaging; if all theatre was this good we wouldn’t need TV’
BBC

Performances take place at 7.30pm from Wed 1 Apr to Sat 4 Apr. An additional matinee performance will be taking place on the Saturday at 2.30pm.