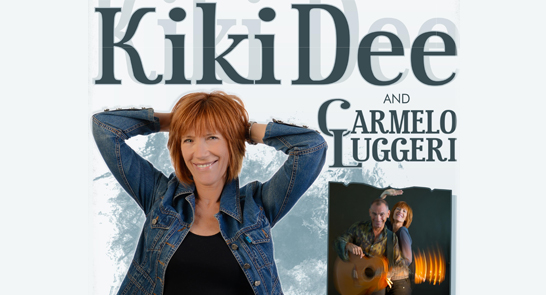 Kiki Dee holds the distinction of being the first female artist from the UK to be signed by Tamla Motown. Still in her teenage years, her blue-eyed soulful voice had won her a deal with Fontana Records and she has since released over 40 singles and a dozen albums. In 1973 her stunning ‘Amoureuse‘ became her first Top 20 singles entry swiftly followed by ‘I’ve Got the Music in Me‘ which charted in the UK & USA and two years later the unforgettable ‘Don’t Go Breaking My Heart‘ with Elton John which made Number 1 on both sides of the Atlantic.

‘Star‘ became another hit and then further chart success with Elton when ‘True Love‘ reached No: 2. Also an accomplished actress, she appeared in Blood Brothers in the West End and on Broadway. Her many TV appearances include Morecambe and Wise, The Two Ronnies and Benny Hill amongst numerous others. Never content to rest on her laurels, she joined forces with virtuoso guitarist Carmelo Luggeri, who has worked with such luminaries as Andy Williams, Bill Wyman, Chris Rea, Kenney Jones, Julian Lennon, Paul Rodgers and Ralph McTell, and they have been touring together for over two decades bringing their spellbinding Acoustic live shows to audiences throughout Europe and the UK.

Performing in this stripped back fashion allows each of their exceptional talents to shine through and create a wonderful warm sense of intimacy for the audience. Expect all the hits plus unique cover versions of songs by Kate Bush, Janis Ian, Marvin Gaye and Leonard Cohen.

TWO HOURS OF KIKI & CARMELO. NO SUPPORT. AN UNMISSABLE SHOW!!