'+ Les Johnson and Me 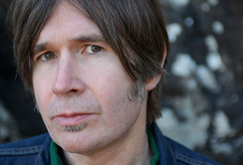 + Support From Les Johnson and Me

After 22 years toiling in the moderately successful pop/rock outfit Del Amitri, Justin Currie made the rash decision to go it alone in 2003, spending the next four years fannying about writing, drinking and doing any weird non-rock gig he was invited to participate in; jazz shows, folk shows and soul shows added more saggy strings to his collection of bows. In 2008 he finally pulled his finger out and pushed the button on a solo career with the release of his masterpiece of maudlin, What Is Love For. The question mark was missing, perhaps denoting an answer reached: ‘the future is miserable and I shall sing it‘.

His fourth album of this series, This Is My Kingdom Now is released this spring and follows on from follow-ups The Great War (2010) and Lower Reaches (2013). The pop sensibility of Del Amitri’s sprightly hits was largely missing from this solo oeuvre, replaced by a tone Currie himself describes as ‘suicide in a saucy shirt‘. Over time audiences have begun to divine hit-type hooks buried within the gloom and now flock to hear epics such as No, Surrender, If I Ever Loved You? and Falsetto with an alacrity some find surprising in an age where distraction from modernity’s inferno is a kind of medical emergency.

Currie lives and breathes in Glasgow, collects beer mats and makes his own cushions.