HOUND OF THE BASKERVILLES (PG) 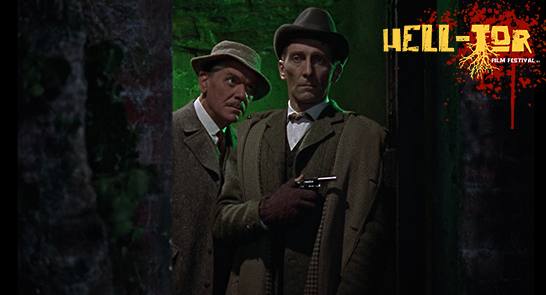 HOUND OF THE BASKERVILLES (PG)

Hound Of The Baskervilles (PG)

Hell Tor invites you to a very special audience with English actor and film historian Jonathan Rigby (English Gothic, History of Horror) and award winning screenwriter Stephen Volk (Ghostwatch, Afterlife, Dark Masters trilogy) to discuss Hammers 1959 Hound of the Baskervilles, as well as reflecting upon other representations of Hound of the Baskervilles and their own love of gothic horror.

The discussion will be followed by a screening of Hound of the Baskervilles starring Peter Cushing and Christopher Lee.

When a nobleman is threatened by a family curse on his newly inherited estate, detective Sherlock Holmes is hired to investigate.

A new festival celebrating Dartmoors rich history of ghosts, ghouls and witchcraft. The inaugural Hell-Tor film festival will present a weekend of Gothic horror with films, talks and readings inspired by the folklore of the moor.

Hell-Tor is a mixture of classic horror features, shorts, lectures and opportunities to hear renowned genre directors, authors and actors talk openly of their own love of the genre and the regions legacy. Its time for horror to come home.

Stephen Volk is probably best known as the BAFTA-winning writer of the notorious (some say legendary) BBCTV “Halloween hoax” Ghostwatch, which spooked the nation, hit the headlines, caused questions to be raised in Parliament, and was recently voted one of the top British horror films of all time. He was also creator and lead writer of ITV’s award-winning paranormal drama series Afterlife starring Lesley Sharp and Andrew Lincoln.

Jonathan Rigby is an English actor and film historian who has written the following books – English Gothic: A Century of Horror Cinema (2000), Christopher Lee: The Authorised Screen History (2001), Roxy Music: Both Ends Burning (2005), American Gothic: Sixty Years of Horror Cinema (2007), Studies in Terror: Landmarks of Horror Cinema (2011) and Euro Gothic: Classics of Continental Horror Cinema (2016). Jonathan has contributed audio and/or video commentaries to the DVD/Blu-ray releases of numerous horror films. In 2010 he was series consultant on the three-part BBC Four documentary A History of Horror with Mark Gatiss.

Explore more of Hell-Tor Festival for less with a day or weekend ticket.

Follow the booking link at the top of this page to book this individual event.