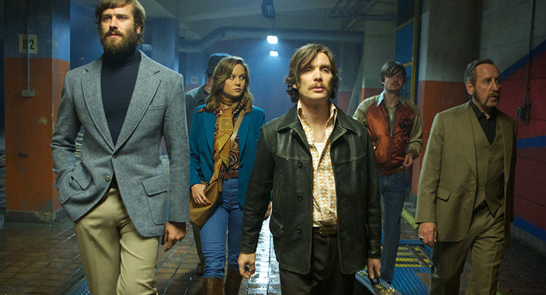 Ben Wheatley  (Down Terrace, Kill List, A Field in England, High-Rise, Sightseers) is one of the UKs most exciting and prolific cinematic talents. Hot on the heels of last year’s High-Rise, he returns with action thriller Free Fire.

Sharp-witted Justine (Brie Larson) brokers a deal on behalf of two Irishmen setting them up to buy a stash of guns from seedy gangsters. But when shots are fired during the handover, complete pandemonium ensues. Dripping with blood, sweat and irony, this heart-stopping game of survival is not to be missed.

Steeped in 1970s Americana, the crackling script and knockout cast have as much fun with character and dialogue as we do with the fact that there are no mobile phones to save the day.

Wheatley’s virtuoso filmmaking filmmaking pays knowing tribute to the kinetic cinema of directors such as Sam Peckinpah and Ringo Lam. With the self-confessed Wheatley fan Martin Scorsese as one of the film’s executive producers and a pulsating score from Geoff Barrow (Portishead) and Ben Salisbury, this is a masterclass in bravura filmmaking.

‘Wheatley continues an unbroken run of quality, helped by a great cast and a startlingly effective premise.’
EMPIRE

Did you know that Exeter Phoenix is a charity? We couldn’t do what we do without the generosity of our community. Keep creativity thriving in your city and make a donation today >>