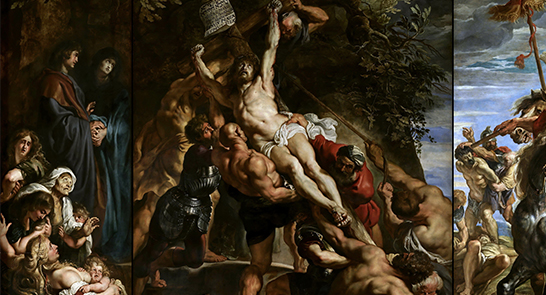 EXHIBITION ON SCREEN is the ground-breaking series of award-winning films that brings the worlds greatest exhibitions, artists and galleries to cinemas around the world. Granted exclusive access, past productions have included Matisse from Tate Modern and MoMa, Painting the Modern Garden from the Royal Academy of Arts, and Vincent van Gogh: A New Way of Seeing from the Van Gogh Museum.

To date, EOS has worked with more than 40 major institutions around the world. Seasons 1-6, with a total of 22 feature films, have played in almost 70 countries worldwide with more than 2 million tickets sold.

‘Wake up to a new way of seeing art’
GQ

The story of Christs death and resurrection has dominated western culture for the past 2000 years. It is perhaps the most significant historical event of all time, as recounted by the gospels but, equally, as depicted by the greatest artists in history. From the triumphant to the savage, the ethereal to the tactile, some of western civilisations greatest artworks focus on this pivotal moment.