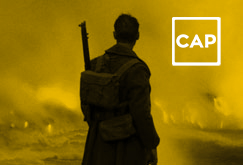 Loaded with suspense, Dunkirk tells the story of one of the Second World War’s most crucial and heroic missions, Operation Dynamo. This mission’s aim was to rescue the 330,000 soldiers who had been cut off and surrounded by the German army.

Oozing with Nolans unique vision, Dunkirk delivers an all-star cast who bring a personal layer to their characters. You will ask only one question: who will get out alive?