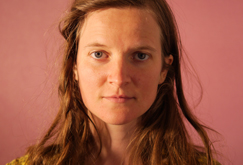 Devon Sproules music welcomes the magical and the tangible.  It celebrates human complication in the language of nature.  It is North American music with weirdo roots.

Since 2007, Sproules recordings have been released by Tin Angel Records, based in Coventry, England.  She collaborates regularly with Toronto-based band Bernice and producer Sandro Perri.  In Summer 2015, she recorded songs from a new collection, The Gold String in Yukon and Nova Scotia.  Besides Canada and America, Sproule also tours regularly in Europe and has traveled with her music to Africa and Australia.

Devon Sproule is a Canadian/American musician living in rural Virginia, raised on eco-villages near Kingston, Ontario and Louisa, Virginia.  The 33-year-old, in addition to being a musician, is a high school drop-out, a birder, and a student of Deaf Culture and sign language. She has been married to producer Paul Curreri for 10 years.

Her quirky affectations bring to mind Bjork, and forays into the dark, Michelle Shocked.
VILLAGE VOICE