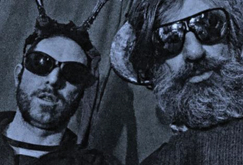 Living off a strict diet of road kill and cider, Cave Mouth play a unique blend of funk, hip-hop, blues and rock  Swamp Funk and this night marks the release of their new I dont have a Dog EP which will be available to purchase on the same day via most online digital music retailers.

With influences as diverse as Prince, Jack White, Kate Bush and Busta Rhymes, their sound is deliciously gritty. Cave Mouth play regularly in Exeter, Bristol and on the festival circuit, even going as far as Hong Kong to appear at the Clockenflap festival for two years running. Their live shows are quickly gaining a reputation as being edgy, exciting and they are great to dance to.

The band all grew up in Devon and it was their love and involvement with the free party, house party and rave scene which helped influence their sound.  Pulling the Strings was the bands last single accompanied by a video which received critical acclaim with their songs regularly played on BBC 6 Music and BBC Introducing.