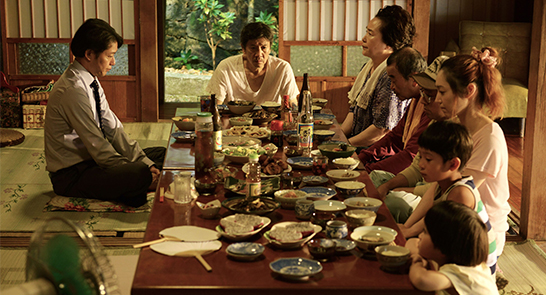 Simply book a ticket for Born Bone Born to be in with the chance of winning a goody bag from the Japan Foundation, London and The Okinawa Film Office.

On the anniversary of their matriarchs passing, the Shinjo family congregate in their ancestral village on remote Okinawan island of Aguni. In line with the ancient tradition practiced on the island, the family must carry out a senkotsu  or a bone washing ceremony  by exhuming the remains and ritualistically cleansing them.

Returning home from mainland Japan is unwed daughter Yuko (Ayame Misaki), who immediately sets local tongues wagging with her advanced pregnancy, while eldest son Tsuyoshi (Michitaka Tsutsui) lashes out at their estranged father any opportunity he gets as he nurses his own wounds. The two are dismayed to find that their widower father Nobutsuna (Eiji Okuda) had been drowning his sorrows in alcohol.

As the clan prepares to bid a last farewell to their wife and mother, they might just find that the journey forces them to face several other unresolved issues. Based on an acclaimed short of the same title, this is the second feature from Okinawan comedian Toshiyuki Teruya a.k.a. Gori. Light-hearted and humanistic in its approach, it is a rare opportunity to learn about a near-extinct regional custom, and a tender meditation on love, family, and coming to terms with grief.

Love, in all its semblances and dimensions, is a state so universally experienced by humankind that it has provided a perpetual source of inspiration in the long history of global cinema.

The Japan Foundation Touring Film Programme 2019 features thoughtfully selected works from Japans artistic repertoire, all focusing on this theme in one way or another. As the conventional binaries defining what it means to love continually give way to new understandings of this sweeping emotion, so too does this years curation aim to provide insights into a wider context of love in Japanese society.