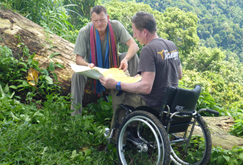 With his usual good humour and enthusiasm, Benedict reveals the full story of his dramatic return to Papua New Guinea (recently featured in an inspiring BBC 2 series) – through the swamps with Frank Gardner, the distinguished BBC Security Correspondent,  in search of the islands elusive birds of Paradise.

Author, adventurer and film-maker, Benedict Allen is the only person known to have crossed the Amazon Basin at its widest, arguably no one alive has lived so long isolated and alone in so many potentially hostile remote environments. His ventures include the first documented journey of the length of the Namib Desert, and likewise he is the only person known to have crossed the full width of the Gobi with camels alone. His journeys are depicted in his ten books – including two best sellers  six BBC television series, as well as other ground-breaking series for National Geographic TV, The History Channel and Channel Five.