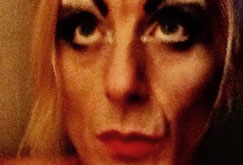 Baby G makes a swift return to Exeter Phoenix for two 1-off-1-hour concerts* in that bit between Christmas and New Year where nobody knows what to do. Why not fill it with some songs, star-studded stories and a smattering of no-nonsense political comment?

Baby is in desperate need of footage for her impending website and will be filming these specials**, a ‘best of’ her ongoing series Songs You Don’t Know You Know. The choicest re-writes, the most salacious showbiz secrets and the funniest anecdotes (with one or two songs which didn’t quite make the cut in the past) Baby G – The Concert promises to be the sparkliest addendum to your festive doodahs.

*They are essentially the same concert. You can come twice if you want but it’ll leave you exhausted.
**Don’t flatter yourself. Baby is the one being filmed, not you.