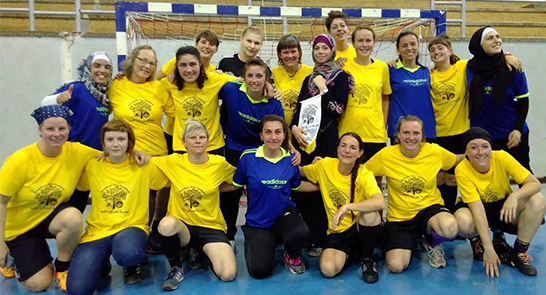 Easton Cowgirls Present: Around The Wall:Bend it Like Bethlehem and Balls Barriers and Bulldozers

The Easton Cowgirls present an evening of Womens Football in Palestine in Association with Devon Development Education. The evening will consist of two films and a question and answer session with two of the Cowgirls featured in the film.

Around the Wall: Bend it Like Bethlehem – A journey through womens football in the West Bank. This documentary film follows a group of women footballers from the UK and Germany on the football trip of a lifetime to Palestine.

Whether playing matches against league teams or informal kick-arounds on the rock-strewn pitches of hill-top villages of South Hebron, football is the common language as cultural barriers are crossed and new friendships established.

The film’s poignant testimonies highlight cultural issues surrounding local women’s participation in sport as well as the struggle to remain steadfast on their homelands. Two members of the UK team that feature in the film will be present at the screening to answer your questions.

This will be followed by a screening of the film from the 2015 tour. Balls, Barriers and Bulldozers.

Money raised from tickets sales will be split between Devon Development Education and projects in Palestine run by HIRN.

HIRN supports Palestinians with whatever they need to assist them to stay in their homes and peacefully resist the occupation. Be this transport to school, a new kindergarten, solar panels or fire extinguishers and first aid kits.