Under 14s must be accompanied by adult 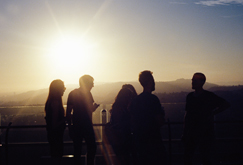 Plus Support From Tender Central

A Blaze of Feather will be swiftly followed by their first live shows, a mini tour of the South West of England, in preparation for a Summer of festival appearances.

Earlier this Spring, an unknown name started cropping up prominently on the British Summer festival posters: A Blaze of Feather. Citadel, Latitude, Boardmasters, all had this curious name, front and centre of their posters. Unsurprisingly the internet churned went into overdrive.

British musician Ben Howard, not one for making too much noise on social media, started retweeting references to this mythical A Blaze of Feather, which, in turn, became a source of great consternation amongst his fans on both Twitter and Reddit. Is it Ben under a new guise? Is this the multi-platinum selling musicians new band? Why has he broken an extended silence to draw attention to a random band name?

The truth is yes, and yet the truth is also no. A Blaze of Feather is the music of Bens long-standing guitarist and friend Mickey Smith, aided by the same, sprawling six-piece band as Ben, including ex Hiss Golden Messenger drummer, Kyle Keegan. That the music shares a similar atmosphere and sonic world should come as little surprise. It was produced by Mickey, Ben and fellow guitarist Nat Wason in a makeshift studio on the west coast of Cornwall, and mixed by Nicolas Vernhes (The War on Drugs/Daughter).