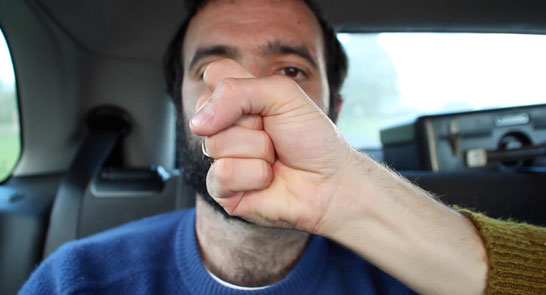 The premiere of Exeter Phoenixs Artists Moving Image Commission winner, Ben Tuppers A Mythology in Self Defense, with a Q&A from the artist. Followed by a short programme of artists moving image from exciting new talent. Including Dorine van Meels Disobedient Children, winner of the Exeter Contemporary Moving Image Award and Adeline de Monseignats stunning new moving image work In the Flesh.

The films dialogue is directly transcribed from a conversation between French filmmaker Jean-Luc Godard and camera inventor Jean-Pierre Beauviala. Presented in conversational fragments, the two men argue over a never completed handheld camera commissioned by Godard and discuss the negative effects the experience has had on their personal relationship. Interwoven amongst their exchange are distantly observed events recorded through a Zenit Photo Sniper, a Russian camera developed by KMZ during the cold war and used primarily for surveillance purposes due to its rifle-like appearance.

To accompany the screening of A Mythology in Self Defence, Berlin based musician Chris Sergeant will produce a live experimental audio composition that will be broadcast simultaneously on community radio station Phonic FM (106.8fm), aiming to act as an alternative iteration or point of orientation between the film and the space in which it is encountered.

In her new musical film, artist Marianna Simnett explores the behaviour of legs, and the back of the knee as a site of varicose veins, vulnerability, and control.

The film focuses on two unlikely protagonists: a sick, inert leg swollen with twisting blue veins (the Blue Roses of the title), which the artist gives voice to, and an army of cockroach biobots  modified insects whose movements are remotely controlled by electrical pulses that buckle their limbs.

Alternating between these two subjects, Simnetts Blue Roses manages to make heroes of one of humankinds most detested creatures  the cockroach  whilst questioning what is at stake when there is threat to that most vulnerable part of the body: the knee.

LuYang created a digital nonsexual human simulator in her own shape for the first time to complete an artwork. Because of the powerful curse in the content of the work, the artist has to apply the spell to herself to avoid harming others. This artwork is all about neurosciences, in which the artist is always interested. She makes use of the principle of the stereotactic system, the deep brain stimulation, and RTMS working on the deep limbic system, in order to extend delusions, substitute into religious perspective and fugacious meditation on the material world, and produce objective delusions.

This work is the artists reflection on her creation in the past, at present and in the future. Is consciousness adhere to the brain? Where on earth is consciousness? The artist simulates the delusions of damaging herself and her works over and over again in her work. It can be sure that these delusions will eventually come true.

Disobedient Children sets out to unravel the relationship between our own desires, and desires as they are formulated by others for us. The script investigates how identities could be produced differently and how one can be political within an increasingly neoliberal society. The visual language of the piece  the atmospheres which the work produces, the 3D generated landscapes, the use of digital glitches and technologically produced moire patterns  can be understood as a stand in for an unknown future, something which cannot be seen but the shape of which can already be discerned.

In the Flesh is inspired by Alison Leitch’s text Visualizing the Mountain (2007) about the marble quarry as being ‘alive’, ‘weeping at night’ and having a ‘soul’. In this mother-to-daughter relationship, the artist plays the role of The Sculpture, of marble skin and human flesh, becoming increasingly more alive, discovering the malleability of her own body, a creature that yearns to reconnect with her roots and crawl back into her mother’s womb, the quarry. By bringing to light the quarrys ability to live, the film also exposes its potential to die.

Pygmalion combines computer-generated models and found imagery to address how ancient ideas of perfection and beauty have been carried forward into the digital age. A contemplative and tranquil meditation on relics, statues and the act of copying, from the plaster cast to the data transfer.