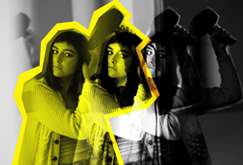 A showcase dedicated to the most promising emerging filmmaking talent from across the South West. Followed by a director Q&A to discuss and share their filmmaking experiences with the audience.

In the near future, a teenager uses an app to play back her memories, ignoring the call and texts of concerned friends. A short sci-fi that explores grief in the digital age.

Striking shots of the M5 bridge and its surrounding landscape complement a meticulous, meditative voice-over, both of which investigate how biography, aesthetics and geography can collide to link us with nature, the wider world, and one another.

Odd Girls is set in the midst of the UK’s AIDS crisis, when a young lesbian finds herself caring for a dying adversary when everybody else has abandoned him.

A documentary exploring the benefits of risk-taking for women in outdoors adventure sport.

What if, you can be all of who you are and still allow another? That just for one night, judgement no longer exists? What if, an intimacy of touch, a truth of want, Swivels around your doubt and trusts? What if, love is not a gender, it is a swivel of the heart?

Bob and Marion are addicted to running marathons. Theyve been doing it for decades, and dont seem to be slowing down yet.

Mary, a heroic pigeon from Exeter flew top-secret messages across the English Channel in the Second World War. Local youth groups, partner organisations and many volunteers produced 1000s of mono-prints and drawings to animate this amazing true story.