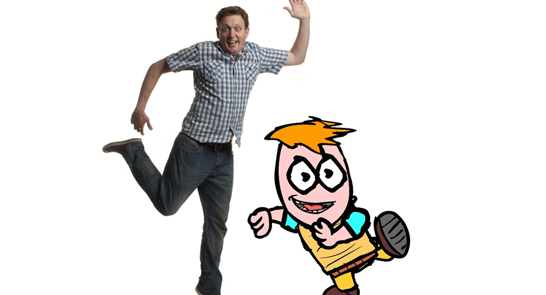 Little Howard is the worlds only live interactive animation. Hes won so many awards and fantastic reviews and hes only just celebrated his 6th birthday (for the tenth year in a row)! Hes also a published author and has done lots of television stuff, like The Royal Variety Performance, The Slammer (CBBC) and Little Howards Big Question (BBC1)  yes, hes even had his own television show!

Yet Little Howard is true to his roots and live theatre is still his first love. But life is tough in showbiz; Little Howards big new act keeps going wrong, Roger The Pigeon has spent all their money on cookie cutters, his comedy counterpart Big Howard has been diagnosed with being clinically unfunny and theres a slug in the backstage toilet. And its about to get worse: a sinister figure arrives and Big Howard and Little Howard have to put on the best show of their lives to keep themselves out of jail!

With interactive stand-up, live animation on stage and lots of jokes and songs this really is a show that all the family can enjoy.

????? ‘It’s silly, it’s clever, original and unlike anything else you’ll see on the Fringe’
BRITISH COMEDY GUIDE

???? ‘A great childrens show with plenty for adults to laugh at too’
SUNDAY EXPRESS

???? ‘Its Impossible not to be won over by this extraordinarily inventive, spectacularly silly show’
MAIL ON SUNDAY

???? ‘Appeals to both kids and adults but, like The Simpsons, its almost wasted on the youngsters’
CHORTLE

‘I defy you not to be helplessly charmed’
THE TELEGRAPH