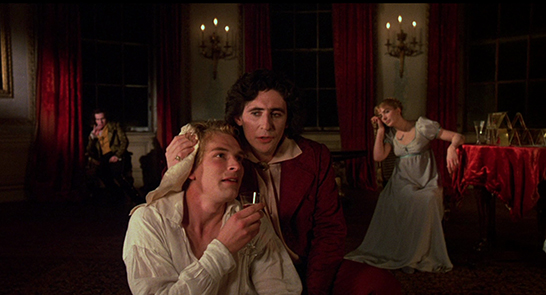 Join Lisi Russell, wife and partner of prolific film director Ken Russell, and screenwriter Stephen Volk for an intimate recollection of the creation of Gothic.

June 16, 1816. Lord Byron and his biographer-physician Polidori play host to Shelley, his lover Mary Godwin, and her half-sister Claire at The Villa Diodati on the shores of Lake Geneva. Unruly and incestuous the entangled guests, hold a séance and conjure their innermost demons which lead to the inspiration of Frankenstein.

A new festival celebrating Dartmoors rich history of ghosts, ghouls and witchcraft. The inaugural Hell-Tor film festival will present a weekend of Gothic horror with films, talks and readings inspired by the folklore of the moor.

Hell-Tor is a mixture of classic horror features, shorts, lectures and opportunities to hear renowned genre directors, authors and actors talk openly of their own love of the genre and the regions legacy. Its time for horror to come home.

Stephen Volk is probably best known as the BAFTA-winning writer of the notorious (some say legendary) BBCTV “Halloween hoax” Ghostwatch, which spooked the nation, hit the headlines, caused questions to be raised in Parliament, and was recently voted one of the top British horror films of all time. He was also creator and lead writer of ITV’s award-winning paranormal drama series Afterlife starring Lesley Sharp and Andrew Lincoln.

Ken and Lisi ran a garagiste movement of independent films in New Forest locales and in Wales, making nine movies from 1999-2012 (Fall of the Louse of Usher, Kitten For Hitler, Revenge of the Elephant Man, Boudica Bites Back) and television specials (Composer on a Bicycle).

Explore more of Hell-Tor Festival for less with a day or weekend ticket.

Follow the booking link at the top of this page to book this individual event.