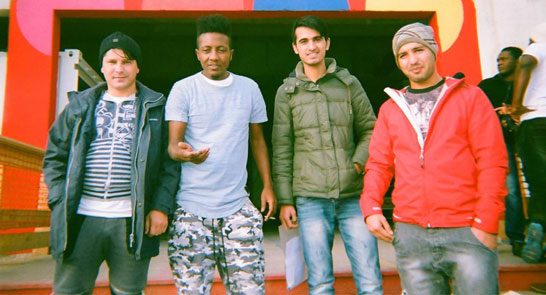 The project was started at the end of 2016 in Porte de la Chapelle camp in Northern Paris. Frustrated by biased and hostile reporting, medical student Amy Lineham gave out 15 disposable cameras to people living in the camp, encouraging them to tell tell their own stories of their lives in Paris. 8 of the cameras were returned and the developed photos form this exhibition. Every story captures, in a remarkably personal way, the challenging life of those involved and written messages alongside the photographs particularly highlight this.

Disposable Perspectives aims to highlight that rather than discrete ‘crises’, migration is, and has always been, a continuous process and borders must adapt to reflect this. Through photography, participants transcend language barriers and demonstrate their humanity, humanity that should be recognised as equal to anyone else in the world.”

Get down early to get to see it, it’s a small exhibition space! STAR will be taking donations to split amongst the work of STAR and that of Disposable Perspectives. The curator will be there to answer any questions you may have.